Every Episode of SVU ever

God bothering simpleton Simon Simpkins made it into the press for his allotted 15 minutes this week when he complained in bitter whiny tones about the above sweet wrapper.

“The lemon and lime are locked in what appears to be a carnal encounter. The lime, who I assume to be the gentleman in this coupling, has a particularly lurid expression on his face.”

That’s not even the best part though. He actually complained about this in a shop and…

“I demanded to see the shop manager and, during a heated exchange, my wife became distressed and had to sit down in the car park.”

I can see the headlines now.

Firstly, the Abyss will be winging it’s way around the country for its first run on September the 25th 2009! And about bloody time too, says my wife every day.

But you knew that, right? Surely 12 exclamation marks in the title can’t just be for something we already know, can it? It’s not.

Looseville is gone. Dead. Retired. Put away in a shiny box for safe keeping until I bring out the Looseville Anthology next year. It’s been sent away for printing today to the far off land of the Orient. More details on that when I have them to send out.

Full Metal Gentlemen, my collaboration with the hairiest man you’ll ever meet, ever, Niall Duggan continues apace. I’ll have some examples to show you all on here in a few weeks once I’m happy with them. I’ve just started with my Wacom tablet and at the moment I’m as green as baby goat shit on it.

It’s my new weekly webcomic, Whale V Squid! It’s a comic that I’ve been wanting to do for a long time so I’m taking the plunge. After finishing the Abyss I found myself really eager to do a webcomic again, so I went and did around 40 comics and we’ll be having a sexy launch party in September in Cork probably, but don’t rule out Dublin either you sexy smog rockets.

So, for anyone keeping count that’s:

I love the internet.

I hate the internet.

I love it again.

I hate it again and I’m never coming back.

I want to be friends with the internet and we’ll see how it goes.

Tagged Random Internet Bullshit, The Abyss Comic, The Otter Man, What the fuck? 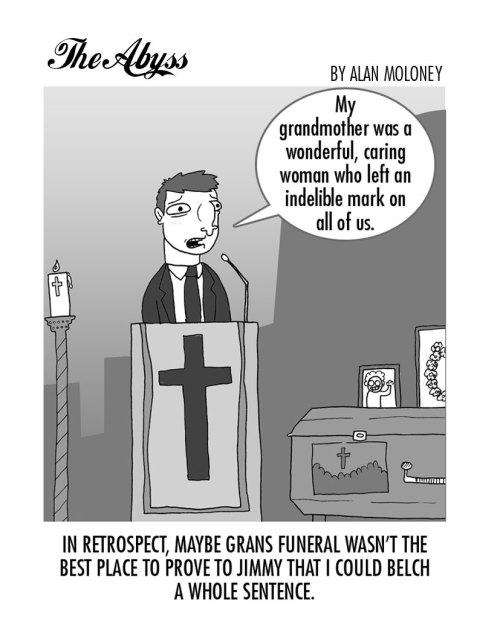 Me, yesterday. Well, according to 90% of people on finding out I have swine flu.

So yeah, I’m one of the people in Ireland with Swine Flu.  From a Mexican pig farmer with boundary issues to me, little ol’ Alan the cartoonist in wet ol’ Ireland all in the space of 6 months, ain’t globalization super?

…the flu. It sucks, no doubt, but it’s just like every other flu I’ve ever had – slightly worse at times, maybe, but nothing dramatic. As the doctor said yesterday, it’s really only people with the dreaded ‘underlying health issues’ that have to worry, just like they would with the normal flu. So basically, as long as I don’t catch ‘underlying health issues” then I’ll be fine.

As it is though, as far as the media’s concerned, I’m this guy.

Which is great. I’m a biological weapon! I could, theoretically, rob a bank using only my used tissues, curled into tight little balls, as weapons. I think I will. Except I’m not supposed to leave the house and I don’t really feel like it. Because I’m siiiiiick.

Tagged I have Swine Flu, T-Shirt

Honesty is the Best Policy (only when you’re doing it for free and your opinion’s worth shit anyway.)

Since I’ve moved any new comics I do offline in favour of printing them up in The Abyss comic book (due out next month by the way plugplugplug) my internet consumption has shrunk dramatically to a few choice sites. Namely, this, this and this.

And, while I was on this straightened internet diet, I came across this post here by Eoin Butler which brings up a very, very good point. For those who can’t bare to navigate away I’ll include the most pertinent part here.

But as a journalist and blogger, I don’t have to worry about that. We consider it completely beyond the pale to submit our own peers to anything like the same level of scrutiny we hold musicians, let alone politicians. Think about it. When was the last time you heard one blogger openly criticising another blogger? I don’t mean respectfully disagreeing on a given point – I mean criticising the overall quality of another’s work? It simply never happens.

This had me nodding my head so spastically I actually gave myself an epileptic fit and swallowed my tongue.

If opinions are like assholes because everyone has one and they all stink then the Irish Blogoshphere is like a giant Harvey Norman full of butts. And all the butts are getting off with each other because they all think that everyone’s the finest thing they’ve ever seen.

Why are the bloggers here so cosy with each other? Is there some sort of blogger sleepover fun-a-palooza that goes on in Damien Mulleys garage? That I’m apparently never bloody invited to? I wouldn’t know any internet person if I saw them.

I’ve only met two other internet people and that’s Liam and Craig from the Comic Cast and, sexy and erotically frightening as that episode was, that’s it for me when it comes to Webbuddies. I mean for fuck’s sake, Bock the Robber could walk up to me on the street and be 20% more offensive than I thought was humanly possible and I wouldn’t know him from Adam, Eve, Moses or the Virgin fucking Mary herself.

I used to think that this, the idea that everyone know’s each other and doesn’t want to cause a fuss at the Xmas party, was why never a cross word was ever said. It’s not, though, because you never have to meet another blogger if you don’t want to. Just don’t go to the Irish Blog Awards.

So why the kid gloves? Here’s why. Convieniently numbered for your convenience. How convenient.

1: They potentially might need links (or have previously asked for a link) from that shite blog with the large readership that they now hate so they are reluctant to go there. This is a stick you would rather not be beaten with.

2: When you call a popular website crap, the Sycophant Squad descends and implies that it is you, in fact, and not their gloried master, that is the one who is crap. And there’s one of you. And, like, 400 of them. And being critical of another website might highlight how bad your writing is, because you have a throwing stones in glass houses complex that you just can’t quit, you sensitive fucker.

3: It’s the internet so no one cares what you think anyway.

So, like Eoin alluded to in his post, it is quite difficult to harshly criticise someone you might potentially meet walking down the street, even if that street is a virtual one. Because, your opinions, and how much of a cunt you are while expressing them, are the only ways you, as a writer, are perceived by the people who read your work.

You could be the soundest man ever to say “howya”, but if you write that all rapists are doing gods work in your column in the Irish Times you can take it for granted that most people are going to think you’re a big fat slobbering dickhead, with a twin pair of cocks molesting a puppy where your eyes should be.

It’s harder for journalists, because more often than not he or she does so under their own name, which means that any criticism that they do of a band, or a celebrity or a politician is counterbalanced by how likely they are to be percieved as a cunt by actual real people who could know and recognise you outside your bubble. It has to be a consideration, especially over something as marginal as a fucking band. Sure, you could get a job in Hotpress and, in your first review, call the Corona’s aural rapists that shouldn’t be allowed to eat the shit of La Roux’s latest opus but don’t be surprised if the Corona’s don’t want you to be their kids god parent.

And besides, only those with a psychopathic need for attention and skin thicker than Jade Goody’s mother are this much of a cunt under their own name (John Waters, Kevin Myers, I’m looking at you.).

A quick look around the anonymous internet sites show in Ireland that these are the one’s more likely to be reactionary, nasty and have the word ‘cunt’ said more often than a gynecologist with tourettes syndrome.

Would Twenty Major or Bock the Robber be so gung-ho with their opinions if it were their real names in the headline?

So what’s my point? Anybody attacking any anonymous blog about the quality of their blog is more likely to do it anonymously from their own anonymous blog, making it worthless. Like two turds arguing over who’s shittier it just ends up doing the regular ol’ Internet Lol Cycle of going from hilarious to retarded in 3.5 posts.

Take for example, this Clash of the Internet Titans from earlier this year. Twenty VS Bock. So dramatic! Look at each tribes Sycophant Squads launching into each other with twin assaults of stuttering outrage, hyperbole and the heinous twins of SHOUTY CAPITALS and written sarcasm, actual sarcasms oft misunderstood brother. It’s like the Battle of Thermopylae with fat, socially maladjusted slobs, and nobody outside the 300 people reading the two blogs could give a shit.

Then, conversely, anyone blogging under their own name that isn’t insane just won’t be bothered attracting the ire of the SS because, hey, regardless of whether Captain MonkeyNinjaPirateStain is a talentless hack or not, who wants to scroll through 50 posts of hysterical drivel from people you’ll never meet calling you a cunt in 50 different ways just because you dared to question their Master’s titanic genius.

The Abyss
Create a free website or blog at WordPress.com.